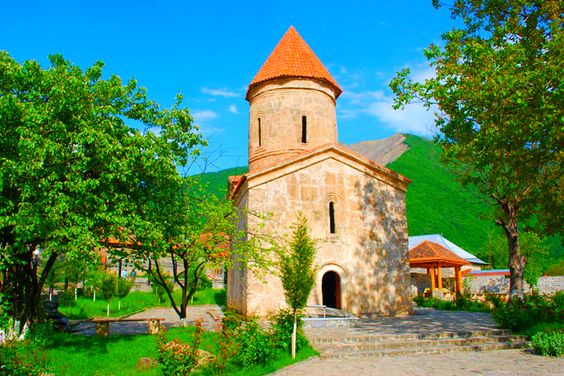 Shaki is located in northern Azerbaijan on the southern part of the Greater Caucasus. Shaki is the most historical places of Azerbaijan .There are many historical buildings, historical church and shops Architecture in Shaki has deeply been shaped by Shaki's history. The city's central and main open city squares are dominated by two Soviet towers. The technique is complex and known only to a few artisans who pass their meticulous craft from generation to generate . On 7 July  2019 The historic center of Shaki with the Khan’s  Palace was inscribed as a Unesco World Heritage Site. Place of Shaki Khan’s was a summer residence of Shaki Khans. The building was built in 1797 by Muhammed Hasan Khan. The Shaki Castle which was built by the founder of the Shaki Khan Haji Chalabi , near the village of Nukha on the southern foothills of the Caucasus. The fortress walls are close to a thousand and two hundred meters long and over two meters thick. Protected by numerous bastions, the fortress is entered by two main gates from the north and south. At the height of the khanate, the fortress contained a gated palatial complex and public and commercial structures of the city, while the residential quarter was situated outside its walls. It was restored extensively between 1958 and 1900.Whole of Shaki territory surrounded with the forest. Shaki is the most comfortable place for who is love nature and history.Also Shaki has a own traditional meals and desserts.

Meeting with guests at airport in Baku or Hotel